Application : Comparison of biphenyl and other aromatic stationary phases

Many of our columns feature aromatic ring-based stationary phases with strong π-π interactions, notably our πNAP (naphthylethyl) and PYE (pyrenylethyl) columns. Several other companies produce similar columns using a biphenyl phase, which has become a popular alternative to C18 in recent years. Here, we compare these columns for several kinds of analysis. 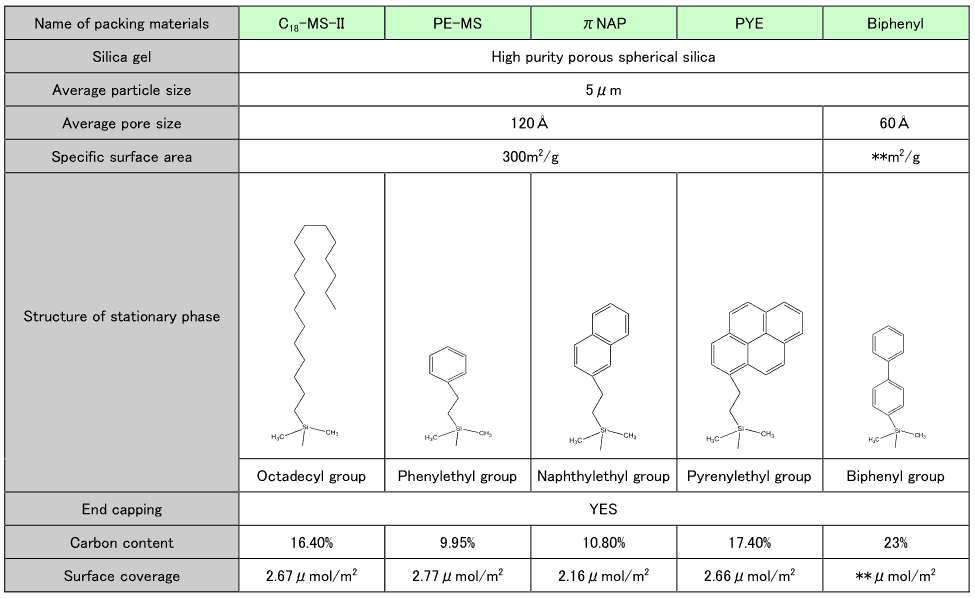 Each stationary phase was evaluated for hydrophobic selectivity by evaluating the separation factor of benzene and toluene.

Each stationary phase was evaluated for π-π interaction strength by evaluating the separation factor of benzene and nitrobenzene. Methanol and acetonitrile solutions were used as mobile phases.

In general, π-π interaction becomes stronger as the number of aromatic rings in the stationary phases increases. In addition, the interaction strength of the biphenyl column, which has two rings connected by a single bond, and πNAP, which has two fused rings, was nearly the same.

The methanol-based mobile phase showed much higher figures than acetonitrile. As acetonitrile has its own π electrons, it is thought that it interferes with the π-π interaction between the sample and the stationary phase.

πNAP can separate more of the sample compounds than biphenyl.

PYE improves on both πNAP and biphenyl.

Biphenyl performs the best, although all columns were able to separate the compounds.