Separation of unsaturated compounds on conventional reversed phase columns such as C8 and C18 is often problematic. Phenyl stationary phases are commonly used for these compounds because they form π-π interactions and show different selectivity from conventional alkyl phases. However, the π-π interactions on phenyl stationary phases are moderate, and the separation for some unsaturated compounds are still insufficient.

Comparison with C18 and Phenyl Columns

Analysis of Cisplatin and its Variants in Water

COSMOSIL πNAP uses a naphthalene-based bonded phase, and exhibits different retention behavior from C18. In this note, πNAP is used to analyze cisplatin (CDDP) and its mono-chloro, none-chloro (hydration complex), and OH-dimer forms in water.

Cisplatin (CDDP) in water converts to its mono-chloro, hydration complex, and OH-dimer forms, and it is thought that they exist in an equilibrium state (fig. 1). Each of these forms was separated and quantified. 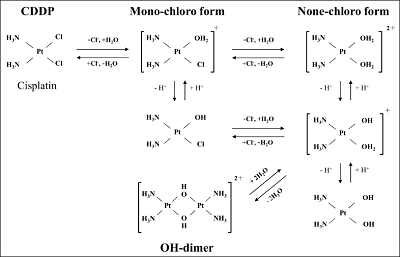 Below is a typical chromatogram; the peak separation was excellent. The calibration curve for cisplatin (CDDP) was linear in the range of 0.01 to 4 mM, and the CV values for within-day and between-day variation were within 5%.

By using COSMOSIL πNAP, it is possible to separate and quantify cisplatin (CDDP) and its mono-chloro, none-chloro, and OH-dimer forms using HPLC.

Application : Comparison of biphenyl and other aromatic stationary phases

Many of our columns feature aromatic ring-based stationary phases with strong π-π interactions, notably our πNAP (naphthylethyl) and PYE (pyrenylethyl) columns. Several other companies produce similar columns using a biphenyl phase, which has become a popular alternative to C18 in recent years. Here, we compare these columns for several kinds of analysis.

COSMOSIL Application, which includes more than 7,700 applications using COSMOSIL/COSMOCORE columns, is now usable by clicking the link below which is in Nacalai Tesque, Inc. The application is searchable by sample category, sample name, CAS No., column name and particle size