This product is an amino acid labeling kit for HPLC analysis. Due to their high polarity and insufficient UV absorbance, amino acids need to be labeled prior to HPLC. In addition, research on D-amino acids has recently been gaining prominence. With conventional labeling reagents, such as phenyl isothiocyanate and dansyl chloride, costly chiral columns are required. This product is designed to label amino acids without intensive labor and achieve chiral separation with achiral columns, such as C18. 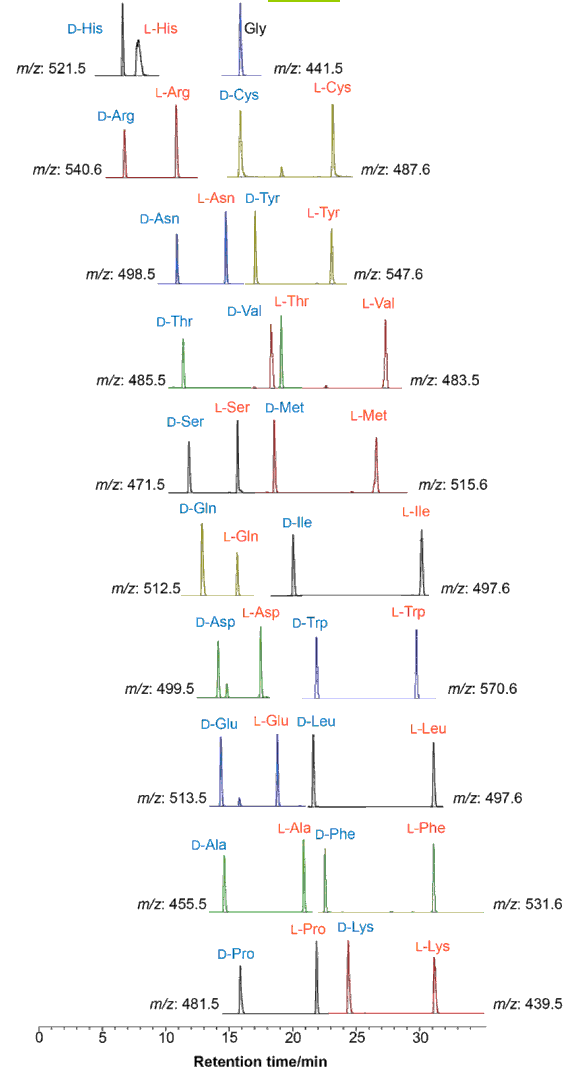 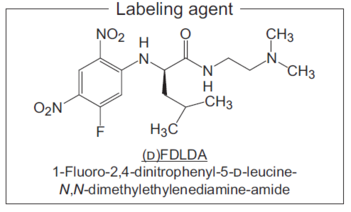 The labeling reagent reacts with amino groups. In addition, some side chains, such as the phenolic hydroxyl group of tyrosine and the thiol group of cysteine, are also labeled. Protocol 1 (step 2) achieves removal of labeling agents on side chains (except for Lys).

mono: Only the amino group of the α-carbon is labeled.
di: In addition to the α-carbon, the functional groups on the side chains are also labeled.

It is strongly recommended that a blank analysis is performed prior to analyzing your sample.

Amino acids from hydrolyzation of peptides were labeled and analyzed by LC-MS. 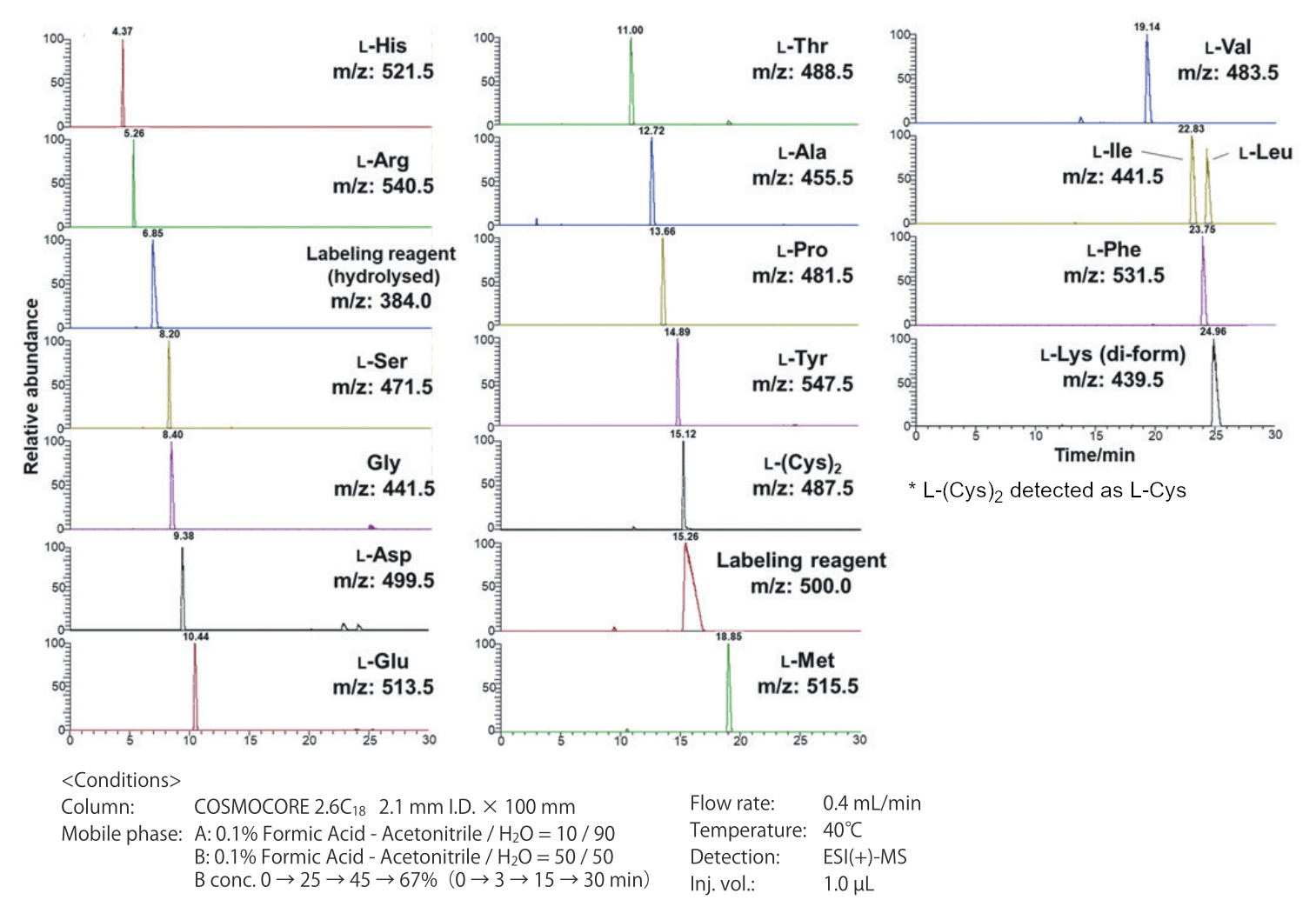 A peptide with an L-form Val at the N terminal and a D-form Val in the center (H-VRVAA-NH2: LLDLL form) was hydrolyzed, and the amino acids obtained were labeled with the DL-Amino Acid Labeling Kit and PITC, which is commonly used for this purpose. 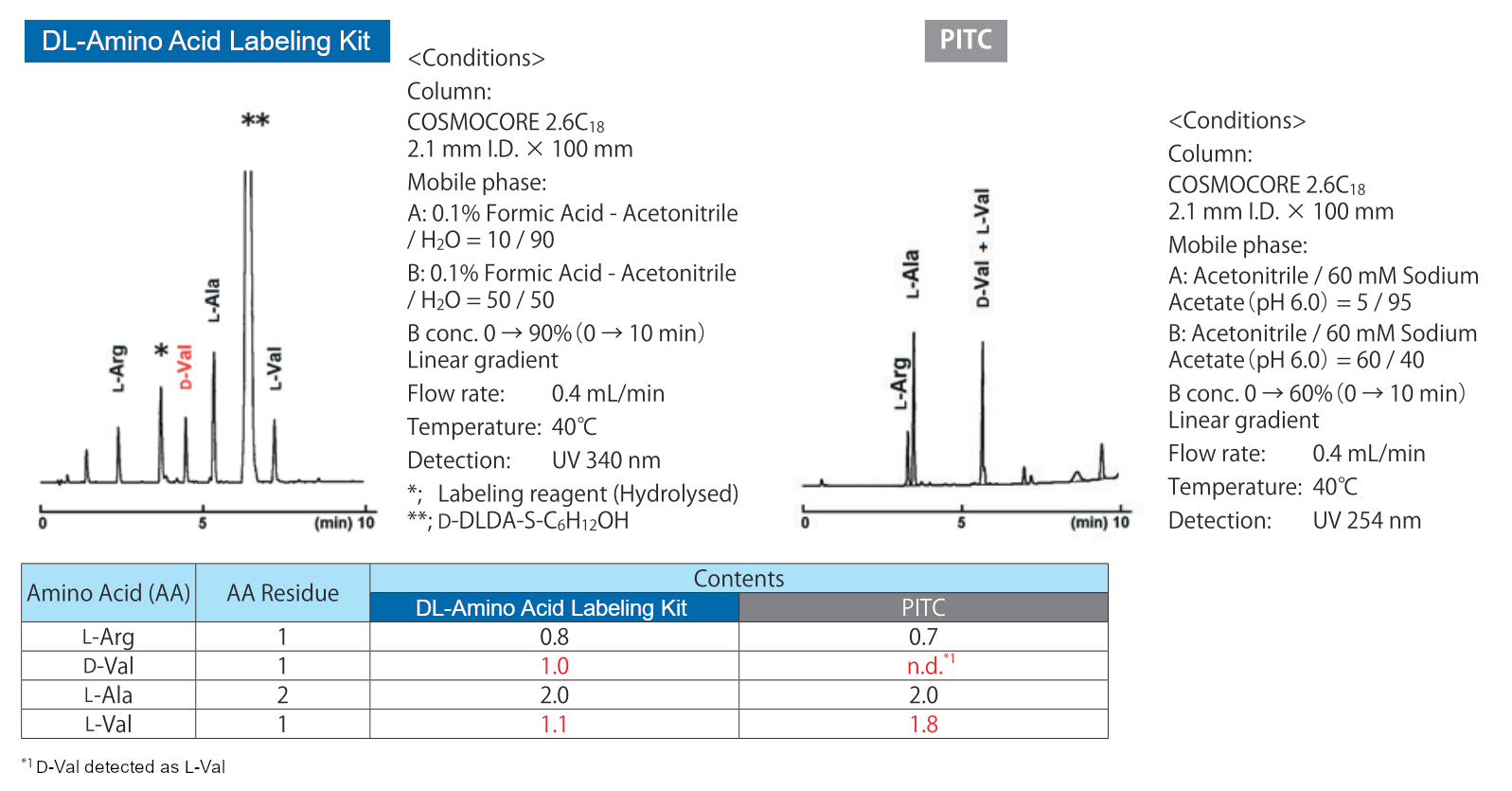 Comparison with other labeling reagents 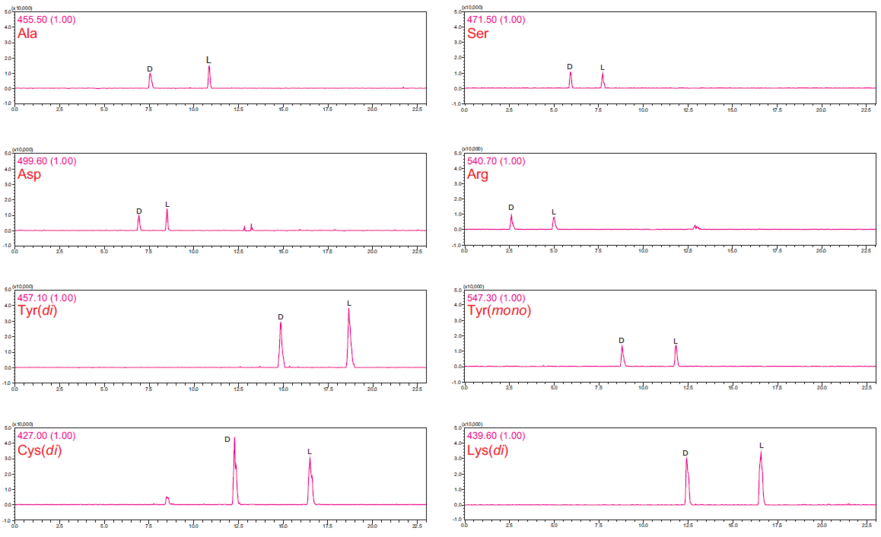 Different concentrations of amino acids labeled with this kit were analyzed by HPLC. The calibration curve shows high linearity over the tested concentrations. 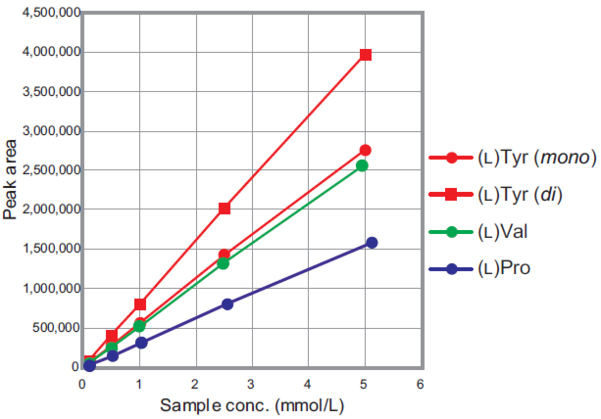 Tyr has different numbers of labeling reagents depending on the protocol used. Upon observing the labeling reaction, it was found that the amino acid was completely labeled 2 hours after starting the reaction.

After reacting for 2 hours, the D/L ratio of the labeled amino acids was measured. It was confirmed that the amino acids are labeled precisely in a 1:1 ratio. In addition, D and L forms that were reacted separately had an enantiomeric excess (e.e.) of 100%. 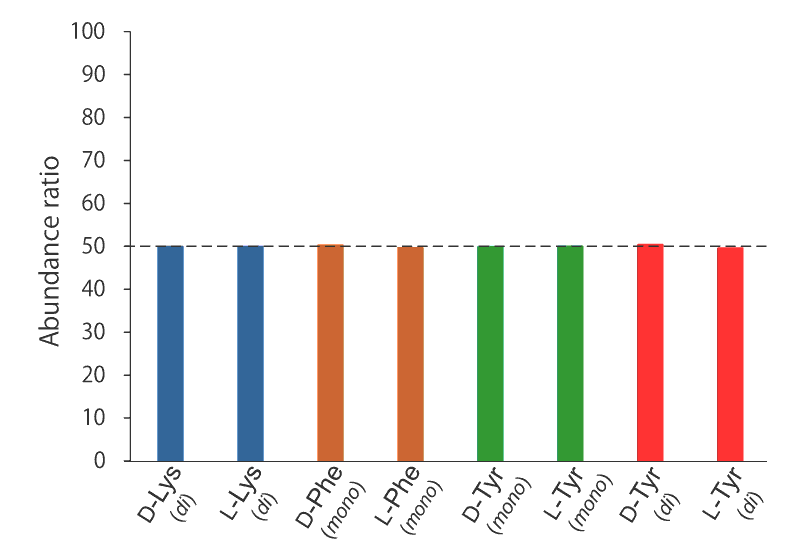 In addition to amino acids, short-chain peptides can also be labeled.

Cholester offers alternative selectivity, which can resolve overlapping peaks caused by the labeling reagents. This can be useful for quantification with a UV detector.

When used together with a C18 column, the widest range of selectivity is achieved. 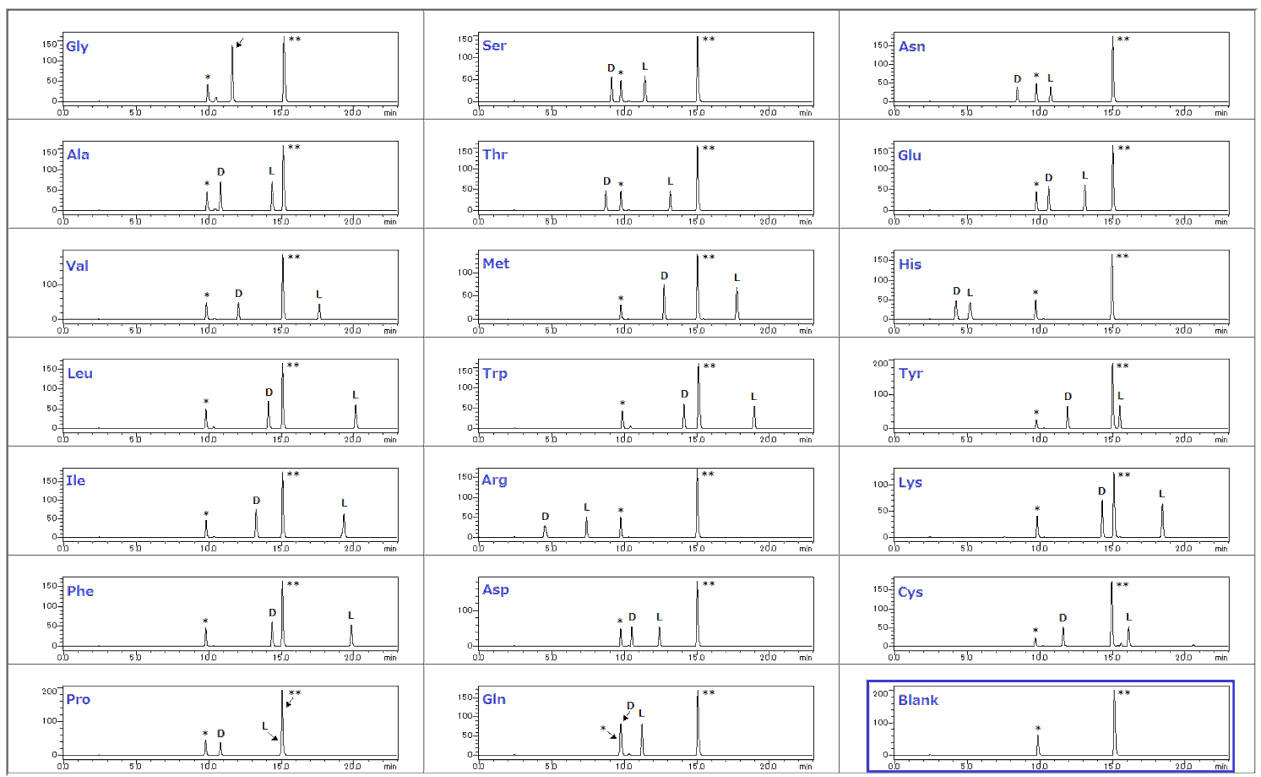 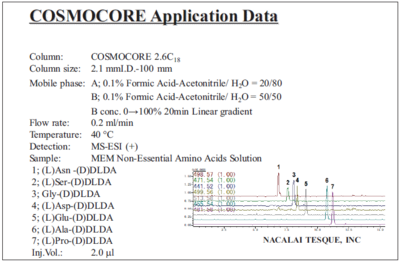 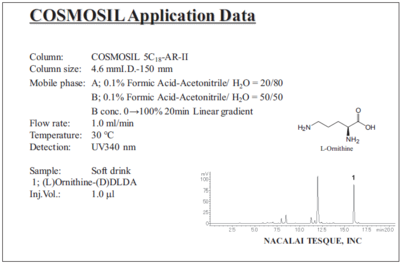 In addition to amino acids, this product is usable for other amine and thiol compounds.

A comparison of the below labeling reagents was performed using pre-column derivatization.

Labeled DL-phenylalanine was analyzed using a C18 column. The labeling reagent in the DL-Amino Acid Labeling Kit has a chiral carbon, resulting in the labeled D and L forms being diastereomers. This makes them separable on C18 columns.

Detection sensitivity was compared using labeled L-phenylalanine as the sample. Both the DL-Amino Acid Labeling Kit and dabsyl chloride had high MS sensitivity, due to their easily ionizable structures.

Labeled L-phenylalanine was analyzed by HPLC 1, 3, and 7 days after labeling. The sample labeled with o-phthalaldehyde was not stable, and therefore should not be labeled manually, but rather using online analysis within the instrument.

* Analysis conditions are as in "Optical separation of DL enantiomers". The peak area measured after 1 day was taken as 100%. Samples were stored refrigerated.